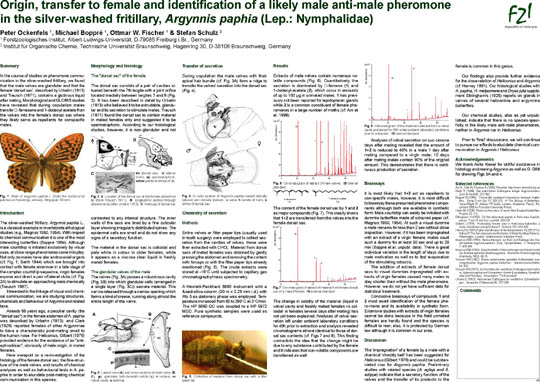 Gilbert, Science 193:419420 (1976) suggested that male-contributed odors of mated females of Heliconius erato could enforce monogamy. We investigated the pheromone system of a relative, Heliconius melpomene, using chemical analysis, behavioral experiments, and feeding experiments with labeled biosynthetic pheromone precursors. The abdominal scent glands of males contained a complex odor bouquet, consisting of the volatile compound (E)-ß-ocimene together with some trace components and a less volatile matrix made up predominately of esters of common C16- and C18-fatty acids with the alcohols ethanol, 2-propanol, 1-butanol, isobutanol, 1-hexanol, and (Z)-3-hexenol. This bouquet is formed during the first days after eclosion, and transferred during copulation to the females. Virgin female scent glands do not contain these compounds. The transfer of ocimene and the esters was shown by analysis of butterflies of both sexes before and after copulation. Additional proof was obtained by males fed with labeled D-13C6-glucose. They produced 13C-labeled ocimene and transferred it to females during copulation. Behavioral tests with ocimene applied to unmated females showed its repellency to males. The esters did not show such activity, but they moderated the evaporation rate of ocimene. Our investigation showed that ß-ocimene is an antiaphrodisiac pheromone of H. melpomene.