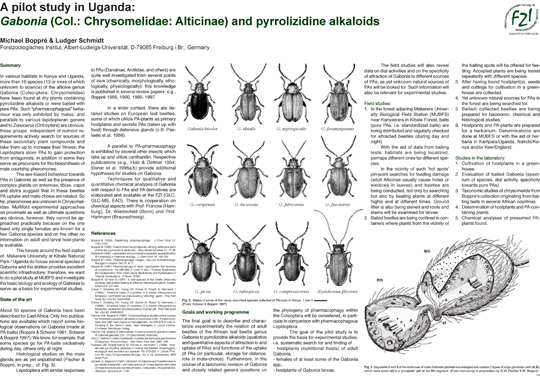 Baits containing pyrrolizidine alkaloids (PAs) attracted 17 species of Gabonia and 1 of Nzerekorena in Kenya, East Africa. In Gabonia attraction is strongly male-biased (>>2600 males vs 27 females). Attempts to discover the beetles' hostplants were unsuccessful, but hosts of several other Coleoptera were recorded, including that of 1 Gabonia species not attracted to PAs. In addition to field-observations, the paper provides descriptions of 13 new species (12 Gabonia and 1 Nzerekorena), keys to the species, and a morphological characterization of peculiar structures in males.

A new species of chrysomelid beetle from Kenya is described and named G. gabriela Scherer. Microscopic peculiarities of the male antennae are characterized by means of scanning electron microscopy. The males of G. gabriela are attracted to and feed at withered plants of the genus Heliotropium (Boraginaceae) at dusk. No females were found. It is assumed that feeding at Heliotropium provides pyrrolizidine alkaloids (PAs), but the adaptive significance of the behavior is unclear. The findings are discussed in the context of utilization of PAs by Lepidoptera.

Key to Kenyan species of Gabonia