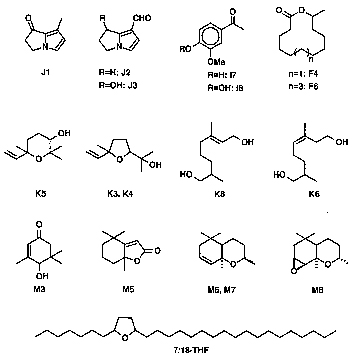 63 Carboxylic acids were identified from the male hairpencils of four species of the genus Amauris (Lep.: Danainae), namely A. echeria (Stoll), A. hecate (Butler), A. ochlea (Boisduval) and A. albimaculata Butler. Straight chain saturated as well as unsaturated carboxylic acids, some of which containing an additional oxygen function, contribute to the species-specificity of the odour bouquets. Oxygenated fatty acids form a new class of insect volatiles, 5 of the 10 ketoacids found represent new natural products. (E)-7-Oxo-11-tetradecenoic acid is the main volatile component of the hairpencils of A. echeria, the species with the highest amount of oxygenated fatty acids (70% of the extractable volatiles). 9-Hydroxyoctadecanoic acid is a major compound in both A. ochlea and A. albimaculata while in A. hecate oxygenated carboxylic acids are present in minute amounts only.

By gas-chromatography and mass-spectroscopy 7 volatile substances have been found on the abdominal hairpencils of Amauris ochlea males, 6 substances have been identified. The spatial distribution of compounds is correlated to the 5 types of hairs comprising the scent organ.

Males of Danaus butterflies possess 2 binate glandular organs: abdominal hairpencils, which release aphrodisiac pheromones during courtship behavior, and pockets on the hindwings. Between these 2 types of organs contacts are established behaviorally: the hairpencils are dipped into the alar pockets. GLC analyses of hairpencil and wing pocket extracts from D. chrysippus show that this contact behavior is a prerequisite for the synthesis of the ketonic pheromone component (for which the term danaidone is suggested) in physiologically normal amounts. Danaidone occurs on the hairpencils only after the males have ingested pyrrolizidine alkaloids as precursors, and after hairpencils have been dipped into the wing pockets. The appearance of danaidone in the wing pockets depends on the ingestion of alkaloidal precursor, but is not affected by the contact behavior mentioned. Mechanisms by which contact behavior might control pheromone biosynthesis are discussed.

1. Male Danaus chrysippus butterflies the larvae of which have been raised indoors on their natural foodplants (Asclepias) lack the pyrrolizidinone pheromone (Fig.1, I) which is known from the hairpencils of field-caught butterflies.
2. Male D. chrysippus have been observed actively approaching withered parts of a Heliotropium plant in Kenya. These observations could be repeated in the laboratory. On the plants, the males suck extensively.
3. A pyrrolizidine alkaloid has been isolated and characterized as Iycopsamine from this Heliotropium species.
4. Significant and up to "normal" amounts of I are found in the hairpencils after the indoors-raised males were allowed to: a) suck on withered and remoistened Heliotropium, or b) feed on a methanol extract of Heliotropium, or c) feed on a solution of alkaloid (II) isolated from Heliotropium (see Table 1, Fig. 2)). It therfore appears that substance II is a dietary precursor of I.
5. Electroantennogram recordings revealed the presence of antennal olfactory receptors for both substances I and II, as well as for the odor of the withered and remoistened Heliotropium (Fig. 3).
6. Experiments in which radiolabelled compounds were administered to D. gilippus berenice males also suggest that the pyrrolizi